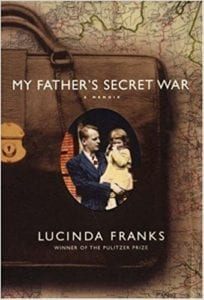 My Father’s Secret War by Lucinda Franks perfectly exemplifies what is wrong in the world today: nepotism. Thanks to the wonder of connections (Franks is a reporter for the New York Times), we have a book about an ordinary couple stuck in a poor marriage, and a self-absorbed daughter who tends to go for the melodramatic.My Father’s Secret War is a story with two goals: to try and understand the parent/child relationship, and to piece together a father’s role in World War II.

Franks begins by exposing her parent’s foibles and their disintegrating marriage. Like so many families, this one has its problems -- in this case an angry mother and a philandering father. While this is a sad tale, it does not deserve to be exposed to the general public. Franks goes to great lengths to reconstruct her parent’s marriage, including the sharing of their love letters to prove their initial passion. Written at the beginning of their relationship, and just after Franks’ father was shipped overseas, the letters shed little light on their marriage and are standard fare for newlyweds. Later, Franks describes her father’s relationship to his girlfriend Pat, her mother’s manipulative behavior, and her reaction to these events. Again, Franks’ rendition of her family’s difficulties does not merit publication.

The second and more disturbing narrative centers on Franks’ obsession regarding the “truth” about her father’s military role in World War II. Franks goes to great lengths to prove that her father was a hero and spy in the war, “Here I am, walking over broken shells with a man I never knew: a weapons instructor for the Resistance, a courier behind enemy lines, who knows what else.” Franks constructs several accounts about her father’s war service, and though she attempts to put the pieces of the puzzle together, the evidence is ambiguous. Not satisfied that her father played his role in the war, and did so without fanfare (like so many brave men of that generation), she seeks to find a greater place in history for him. It is almost as though Franks is trying to polish her pedigree to impress those around her.

Under the guise of trying to bridge the gap between daughter and father, Franks subjects her father to endless hours of interrogation about his role in the war. Her father, who suffers from Alzheimer’s, is clearly exhausted and in poor health, yet Franks is like a dog with a bone – she will not let go. Married to New York District Attorney Robert Morgenthau, and obviously financially well off, Franks’ personal admissions are frankly embarrassing. When asked by her father’s friend to help lift her dad’s financial burden, she responds: “We just can’t do it Lou. We’ve got three households to maintain; we’re already spread too thin.” At the very end of the book we learn the real reason Franks has written this story: “I had wanted to hurt my father as much as he had hurt me. I’d nagged him, manipulated him into confessions, then shamelessly condemned him. Little by little, I’d forced him to give up every shred of camouflage, until he was utterly exposed.” Mission accomplished.

Quill says: This book is a sad reminder of the contrast between those brave men and women who did their work and lived their lives with dignity, and the self absorption of the baby boomer generation.