ELLA: A Biography of the Legendary Ella Fitzgerald 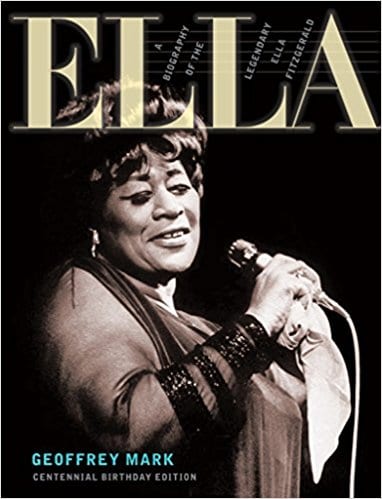 ELLA: A Biography of the Legendary Ella Fitzgerald

Entertainment writer Geoffrey Mark has constructed the thoroughly engrossing story of Ella Jane Fitzgerald, who rose from poverty to become one of the iconic singers of the 20th, or any, century.

As depicted by Mark, Fitzgerald was a product of a common law marriage and abused by a stepfather as a teen; she hung out on the streets of a multi-ethnic neighborhood on weeknights and sang in church on Sundays. She loved to dance, convinced that hoofing was her destiny. At 16 she entered a music contest, planning to dance, panicked when her name was called and sang a song instead, resulting in an encore and first prize -- $25. Through connections from that first performance, she met swing bandleader Chick Webb and began to tour with him. Three years later, Fitzgerald was voted Number 1 Female Vocalist in readers’ polls from Downbeat and Melody Maker, beating out Billie Holiday Bailey (Mark notes that her male counterpart in the polls was Bing Crosby).

Fitzgerald matured along with the recording industry and later the golden age of television, providing fast-moving vehicles for her remarkable career, recounted by Mark in a year-by-year format. In 1945, she made recording history with a wordless single utilizing one of her signature talents -- scat singing. With scat, she turned a gimmick into a jazz tradition that no one could match. By the 1950s she was a regular on the TV variety show lineup, recording with the jazz greats -- Count Basie, Duke Ellington, Louis Armstrong -- and pop stars like Bing Crosby, Tennessee Ernie Ford, Pat Boone and the Ink Spots, helping to create songs made just for her. She sang the hits of every era she lived through; her original phrasing and inimitable tone made her equally comfortable with “I Loves You Porgy,” “Mack the Knife,” and “The Old Rugged Cross.”

There’s hardly a page of Mark’s behind-the-scenes bio that does not record some innovation, award or distinction garnered by The First Lady of Song. Yet she was rather shy, admired for her dignified bearing as well as her vocal gifts. She ascended to worldwide acclaim as a black woman in an industry dominated by white men. With the help and push of manager and close friend Norman Grantz, she stayed in the limelight well into her twilight.

The book, which the author freely acknowledges is an unauthorized biography, focuses primarily on Fitzgerald’s public life, but with many personal glimpses. She was married and divorced twice, and with her second husband adopted a son whose life Mark characterizes as rather lonely since his mother was so often away. She gave generously to charities, was a civil rights activist, and in her last few years enjoyed staying at home, regaling famous and family visitors with tales of her past -- despite failing sight, hearing and serious health complications.

Mark felt drawn to this project after seeing Fitzgerald perform and learning that there was very little in print about her. He writes in a conversational style that suits his subject, dispelling rumors about Fitzgerald and noting her thousands of professional accomplishments. In producing his comprehensive chronicle, he received invaluable input from a number of key players in the saga: Val Valentin, Joe Pass, Dinah Shore. This large photo-rich offering celebrates Fitzgerald’s centennial, with a Deluxe Edition available that includes a 2-CD set of Ella’s recordings.

Quill says: Ella Fitzgerald fans and those just discovering her musical talents will find this book a treasure - lengthy bio, discography and hundreds of amazing anecdotes about the Queen of Jazz.