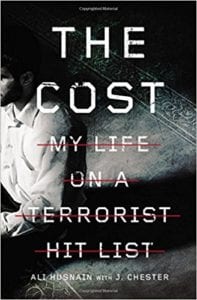 A young man, who shares his story of conversion to Christianity, tells his amazing story in this new book, that will open readers’ eyes to just how blessed we are in the Western world to be free to worship whoever/however we want.

Ali Husnain (all names were changed for safety reasons), opens his memoir with a brief prologue in which he recounts his time hiding out in a dilapidated shack, fearing for his life. What brought Ali to such a horrible place, and why does he then flee to England?

In order to understand what brought Ali to such dire circumstances, the reader is given an intriguing look into his life. Born into wealth, Ali was a Shia Muslim, who took his easy life for granted. His mother, Ami, was one of those very rare Pakistani women who successfully filed for divorce from her abusive husband. While the divorce proceedings were underway, the family moved in with Ami’s mother, and eventually with Ami’s new husband.

The author recounts his early life, the trouble he and his friends caused, as well as the good times with the mother he adored. All that would change, however, when he and his sister went to visit their ailing Aunt Gulshan in Oxford, England. During their visit, Ali was astounded to learn that his aunt had converted to Christianity. At first he tried to dissuade her, but eventually, he came to know the peace of accepting Jesus as his savior. Returning to Pakistan, Ali tried to hide his new found faith, but one mistake blurted out to some friends and his life spiraled out of control.

The Cost, written by a very brave young man (Ali was just 17 when his conversion took place), will have the reader riveted to the pages. For Westerners, it will be hard to comprehend many of the things the author divulges about daily life in Pakistan. At the same time, reading about Ali’s wonder when he visits England and experiences such simple pleasures as walking into a huge (to him) grocery store, and realizing that anybody, regardless of stature, can go into the local electronics store, will make ‘us’ appreciate just how lucky we are here in the States. The true revelation, however, is to see what a Christian man is subject to in a Muslim country – ‘horrifying’ is one word that comes to mind but that might be an understatement.

Ali opens up about his personal experiences, what happened while attending church and his inner struggles before accepting Jesus. Evangelical Christian readers, in particular, will find these events of great interest. The most profound statement I’ve read in a very long time, in any book, came in the chapter “Jesus, Only Jesus” in which Ali notes, “What struck me...was the fact that I had witnessed something in church that I had never experienced in a mosque: the absence of fear.” (pg. 101) Whether or not you’re a Christian, this book will make you ponder the realities of life as a Christian in a Muslim country.

Quill says: A book written by a very brave man, that shows the price he paid for his beliefs, and proves just how blessed we are in the Western world to be able to follow any faith.