FQ: You seem to possess an extensive knowledge of everything related to horses. Can you share how you learned all this information?

TURNER: Our ownership of two quarter horses, a large barn, a sizable corral, flat acreage, and nearby trails to the nearby Thames river were among my best memories of growing up in Connecticut. Lots of freedom, lots of fun. I also liked learning about horses in the latest Western Horseman magazine, which my father subscribed to and always passed on to me. As I got older, I became fascinated with the United States cavalry, and absorbed any detail I could find regarding its role in taming the Western frontier.

FQ: Is the character of Lieutenant Tom Cooper based on anyone you know?

TURNER: No, his character was my own creation. I wanted him to exhibit qualities Henry would come to admire. For example, I wanted the lieutenant to embody strength and courage, in the process helping the teenager with his troubles and enabling him to stand tall and strong. I wanted the lieutenant to be a role model of honor and gallantry, but also made sure he exuded kindness and compassion. I wanted Tom Cooper to come across as rugged as he was wise, honest as he was dependable.

FQ: Henry Cameron, the main character, and Monte, his horse, forge a special bond throughout the story. Do you, or have you ever, had such a meaningful connection with a horse?

TURNER: I loved our family’s first horse, Mayday. I was very young when we acquired him, and I was assigned the duties of watering, feeding, shoveling manure, those sorts of things. Hauling water from a distant location and mucking out Mayday’s stall weren’t my favorite chores, nor was the back-breaking job of hauling hay, straw and grain, but it was done without complaint, at least until I was out of earshot of my father.

FQ: Henry and Lieutenant Cooper share numerous similarities in their lives, with one of the most significant being that they were both raised by an adult other than their parents. Why did you choose to develop characters with this particular trait?

TURNER: In many respects, they were removed from their parents but for different reasons. While Henry was created pretty much as a lost soul leaving behind a shattered family, the lieutenant suffered from parental indifference and coldness. In many ways, though, both were lost souls. They suffered alone, but I wanted the story line to bring them together.

FQ: The story suggests that Henry and Lieutenant Cooper are “kindred spirits.” This was an interesting comparison that I have not read much about in other novels. Is this a phenomenon that you have personally experienced in your own life?

TURNER: I’m convinced that a kindred spirit of some sort exists—somewhere and sometime—for many of us. I think for those fortunate souls who discover one, an interesting and intriguing life chapter will unfold. I ran with this idea in the novel and explored the richness this special connection can bring. I interwove the two kindred spirits by creating a force that enmeshed both. I wanted the concept of a kindred spirit to bring peace to the story’s partnership along with the message that for many of us, someone is out there waiting, a person who is destined to become a welcome intruder, a life companion who truly knows and understands.

FQ: What was it like for you to be writing a story about the Spanish flu pandemic of 1918 while living through the Covid pandemic of 2020?

TURNER: It was one of the most extraordinary and surreal experiences I’ve ever had in my life. I began writing this novel a year or so before the 2020 pandemic. History was essentially repeating itself over a one hundred year span and I found myself caught smack dab in the middle, writing about one pandemic while living through another. As I started turning over the stones in my research I found that surprisingly, the two epidemics weren’t as different as first thought. Furthermore, the more stones I flipped the more I realized that many of our past mistakes were still around to haunt us.

The 1918 and 2020 epidemics employed essentially the same methods to mitigate the spread of the virus: shutting down schools, wearing masks, self-quarantining, social distancing, handwashing, and such. Neither generation was prepared for the pandemics’ devastation, and as such hospitals were overcrowded and medical practitioners overworked. The virus killed males and females, young and old, rich and poor, people of all colors. Today as in 1918, the poor, the working classes and those living in less developed countries suffered the worst.

Of course we’re far better off today than the 1918 remedies and treatments of the past. Contemporary medicine has added vaccinations and anti-viral drugs to its arsenal. Doctors and nurses are better equipped to isolate and handle large numbers of ill and dying patients, and physicians have an array of medical modalities to address acute phases of the disease.

FQ: After reading your book, the title, A Rescued Soul, seems even more fitting. I can find more than one “rescued soul” in your story. Is there a certain character that you had in mind to be this rescued soul when you chose your title?

TURNER: Good question. Originally, I chose the rescued soul to be Henry Cameron, the rescuing being done by lieutenant Cooper. However, it was the lieutenant who also needed to be rescued, as did Henry’s battle-ravaged pal, Mickey. Let’s also not forget how the horse Monte needed to be rescued from its earlier trauma. All in all (as critic Katie Specht correctly pointed out) the tale is an allegory revealing that sometimes the person needing to be rescued instead turns out to be the rescuer.

FQ: Based on this story, it can be suggested that you feel strongly that horses need people as much as people need horses. Do you feel that this can carry over to people’s relationships with other animals as well?

TURNER: I really believe that attachment is a two-way street, especially with horses as well as other animals like dogs. Of course, horses forge stronger connections with other horses than with humans, but I think they still need us in their lives as much as we need them. How great that need becomes is influenced by many factors, such as trust, kindness, and patience. I think consistent and skilled handling techniques are a must, as well as responding to the horse in a gentle and forgiving manner. Watching mutual attachment unfold is as breathtaking as it is beautiful. So too is realizing that once trust occurs, you’ll have it forever.

FQ: Your military knowledge seems quite expansive. Have you served in the armed forces?

TURNER: No, I have not served in the armed forces. However, I had a grandfather who fought in the trenches in France during World War I, and a father who served as an airman in a B-17 Flying Fortress during World War II. Their diaries and letters during these conflicts contributed much to the story’s wartime depictions and tragedies.

FQ: In addition to writing novels, you are also an author of numerous academic books. How does writing a novel such as A Rescued Soul compare to writing a book on academia?

TURNER: For me, the two writing worlds were like night and day. I authored or co-authored over twenty academic titles for some of the biggest publishing firms in the United States (e.g., Prentice-Hall, Harcourt Brace, W.B. Saunders, Holt Rinehart). Sales were good, the financial rewards excellent, but the author deadlines exhausting. Adherence to a strict APA style was a must, and a great deal of the writing was reporting and synthesizing the existing literature, not exactly planting the seeds of imagination, which rests on the shores of creative expression. I needed a break from all this and began writing novels, which of course required learning new rules. To be any good at this, I knew I had to make my writing as seamless as possible, and realized in a hurry that this needed to be applied to sentence construction, plotting and development, and perhaps most importantly, to dialogue. I’m still trying to get the hang of it all, and to date haven’t been run out of town. Yet. 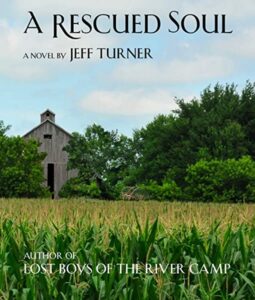