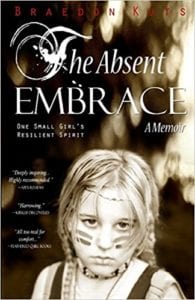 Braedon’s mother could be “charmingly elegant,” but disarmingly frightful when she roared past the bounds of civility in one of her many physical and verbal assaults. She was the devil incarnate when she unleashed her fury on her defenseless, diminutive child, but perhaps worse was the utter disregard and neglect for her daughter that would ultimately cause the most damage. Her grandmother has been the “seed of [her] mother’s dysfunction,” but it hadn’t always been that way, because once upon a time they had actually been a family.

Braedon’s father had been a white-collar worker for Bayer Laboratories. Her mother pretended to be June Cleaver to her and Chancy, her older brother. It was an act she had perfected and the only thing missing was the apron and the flounce to the door when her husband arrived home. In her mind’s eye Braedon could remember that, “We looked the picture perfect portrait of two children on the rise of success. But nobody could have imagined what happened behind closed doors.” (pg. 191) Perhaps it was what didn’t happen behind those doors that ate at her heart, her soul, and very being. There was no expression of love or affection, save a rare, mentally ill charged rant of false platitudes of her undying love for her daughter. Bean, as she was affectionately dubbed by her brother, increasingly turned to him to fill in the missing pieces of her life, a life her mother couldn’t provide.

Scott, Todd, and Asher, three boys who cared for and befriended her, could not help her as she became increasingly feral in her need for drugs. Mother had introduced her to them and while groceries were nonexistent, the drink, wine, and cocaine became staples in her increasingly upside-down world. Warren, a boy who sought refuge in their house in an escape from his own dysfunctional household, discovered an unconscionable insanity. When confronted by Mother, who seemed to live in her own little world, he lashed out, “Well, for one thing, you let your daughter shoot dope. She’s twelve years old, and the fact that doesn’t concern you is disturbing, to say the least. She doesn’t have one decent pair of pants. There’s never any food in this house.” (pg. 73) As Braedon tried to climb out of a sinkhole of her mother’s creation, she somehow sank even lower, scrounging food from other people’s garbage in order to survive.

Chancy struggled to take care of them, but Mother took no notice, nor did she care. Somehow her own June Cleaver image had betrayed her and she’d become the antithesis of it when she became a stripper. Her behavior plunged them all into a putrid existence no one seemed to take notice of. “Someday, Bean, I’m gonna get us an apartment in downtown San Francisco, and the cupboards will be stocked with real food like meat, cheese, and guacamole. I’m gonna take care of you. You and me.” (pg. 173) “Mellow-drama.” It was all a bunch of hogwash to her mother. Would Braedon be able to raise herself from the hellish depths she had plummeted? Would she die at the hands of her mother before anyone noticed her pain? Were things like dreams of cheese and guacamole the best she could hope for?

This is a tale that never should have been written, but will be written time and time again because there will always be people who turn their backs on the plight of innocent children. As Braedon speaks we can hear an unspoken pain and at times she tends to waver between being an innocent little girl and a child way beyond her years. Her story is not told in a linear fashion, but rather one in which she recalls pummeling events that impacted her psyche. At times I found myself a bit lost because the writing style did not transition well after a flashback. They were like small dissociative disruptions in the text, something that made this autobiography feel all too real for comfort. Few would be able to express excitement over the misery of another human being, but I see this as a tale well told, a catharsis for Braedon. In her sequel, Please Don’t Love Me, Braedon tells us the story of the rest of her abusive childhood … I’m ready to listen and learn about the tenacity and courage of one small girl.

Quill says: This stunning tale of abuse and neglect will shock you, but also show you just how resilient the human spirit can be in spite of all odds.

For more information on The Absent Embrace: One Small Girl’s Resilient Spirit, please visit the book's blog at: www.theabsentembrace.blogspot.com