A Little Bit of Grace 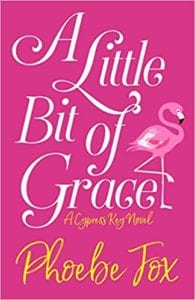 A Little Bit of Grace

Grace and Brian run an estate law firm that they inherited from their parents. The practice has been in their family for multiple generations. Since they grew up together, the two quickly become best friends. They spent countless hours together growing up. Their families even lived a couple houses away from each other. After graduation, Grace and Brian went to two different colleges.

During their time at college, although they were still friends, their friendship was a little different. Having grown up with each other, Grace developed feelings for Brian. While he was at college, Brian did date other people. During their senior year, he even brought a girl named Angelica home for their Thanksgiving break. Although it was a little difficult for Grace to handle at the time, after graduation when the two moved back to work at their family’s firm, Angelica was long gone. Things changed after they both moved back home. Brian and Grace began to get closer again. After multiple dates, the two eventually got married.

Although they had a good marriage, they did have some obstacles that they had to get over. After 10 years, the two ultimately decided to get a divorce. Throughout the divorce, the two remained civil. Since Grace and Brian were living in his parent’s old house, after the divorce, Grace decided to move back in with her mother, a couple houses away. Even after the divorce they still remained friends and continued working in the family law firm together. Shortly after moving back home, Grace’s mother was diagnosed with Parkinson’s disease. After her mother passed away, it was hard on Grace since she had no family except Brian around her.

One day while Grace was at the practice, Brain asked if they could meet up after work. Grace, still not fully over Brian, agreed. When the doorbell rang, she had no idea that her life was going to completely change. When Grace answered the door, it was Brian and Angelica. Grace, still remembering who she was, reluctantly let them in. Instead of Brian coming over to try to reconcile with Grace, he was coming over to tell Grace that he had moved on and that Angelica was moving to Sugarberry to be with him.

Grace was stunned and knew she had to get away. While Grace was sitting there thinking about everything that had happened, she remembered a postcard that had arrived, addressed to her mother. The postcard was written for her mother, but Grace had no idea who wrote it. The writer asked for Grace’s mother Patricia to come visit. Grace, seeing this as a potential getaway, dialed the number. When the person picked up, Grace began explaining the postcard and a little about her mother. It turns out, that the person Grace was talking to was her mother’s aunt Millie. Although Grace had never met her, she decides that going to Florida and meeting her would be a nice way to get away from Brian.

Grace soon leaves to go to Florida to meet her aunt. Although she is excited to get away, she has so many questions. Who is this mysterious person and why hasn’t anyone in her family ever mentioned her before? If she really is her aunt, what happened that caused everyone to forget about her? Grace, although wanting to know the answers, was reluctant to learn the truth. She soon realizes that her little getaway wasn’t just for her to do some soul searching, but to discover decades old family history.

A Little Bit of Grace is a great book that is very well written and not at all a typical women's fiction title. There are so many things going on that people can really connect to, from break-ups, to divorce, moving on and various family issues. Although there is something for everyone to connect to, it does keep you guessing. It leaves you wondering what was so bad that someone could completely disown their own family. Once you find out, although it is a controversial topic, it leaves you wondering what would you do. This book is a wonderful read and definitely gets you thinking.

Quill says: This is a great heartfelt book that will definitely get you thinking.