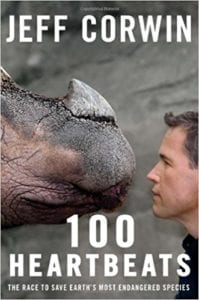 ‘100 Heartbeats’ is an exclusive animal club that no animal species should belong to in our modern world. It is a club whose members are chosen because they number 100 or less living specimens. It is a sad commentary on what humans have done to our animal brethren and it is also the name that Jeff Corwin has chosen for his newest book.

In 100 Heartbeats, Corwin examines the various manners in which an assortment of animals have been impacted negatively both by man and the environment. From global warming, to pollution, and exotic animal trafficking, to feral cats destroying native bird populations, Corwin does a good job of examining the different causes of extinction. The author recounts how something as simple as a fungus wiped out entire frog species while something much more sinister, man’s lust for ivory, is responsible for depleting many of the elephants from Kenya.

Much of the book is written about Corwin’s personal experiences with various endangered species and this is where the book shines. From tagging polar bears near the frigid village of Kaktovik, 300 miles from the Arctic Circle, to the heartbreaking tale of rescuing scores of animals kept at a private collector’s home, these tales truly make a person think. There are many captivating stories, such as the German shepherd who brought home the carcass of a black-footed ferret, thought to be extinct, which led to the discovery of a group of 130 more ferrets. Corwin tells how the ferrets next suffered a devastating outbreak of canine distemper and plague which dropped the population down to a mere 4 ferrets in the wild. A team of biologists caught all but one, dubbed ‘Scarface’ both for his scars and his tenacity at avoiding capture. Would the species rebound? You’ll have to read the book to find out. It should be noted that Corwin gets quotes from those personally involved in saving these species, which adds must to each story.

While the personal stories are the backbone of 100 Heartbeats, the book frequently gets bogged down in statistics. The author presents background on each animal he highlights, including in some cases, a fairly extensive history. Also included are things such as current numbers in the wild, how that quantity has varied over time, what difficulties each has faced, and what has happened to the habitat. These sections read like textbook entries and are, at best, dry and tedious. It is, to be fair, important information, but perhaps a little less technical information and more emphasis on personal experiences would be just as effective at getting readers involved in the plight of these animals.

Quill says: If you can get beyond the dry writing in parts, this is a helpful book to learn about endangered species and how we can assist them.