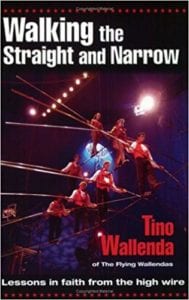 On the European continent there were many itinerant circuses, but one legendary family of circus performers who began in the 1830s continues to inspire its audiences today with their legendary aerialist feats. This, "traveling circus troupe consisting of acrobats, jugglers, clowns, aerialists, and animal trainers" were an amazing family ... the Wallendas. Engelbert Wallenda was well known as an expert trapeze artist in the late 1800s, but his juggling ability was questionable as he could not seem to juggle his work and his family. An abusive man, he abruptly left his family leaving them to fend for themselves. One of these children, Karl Wallenda, was so severely emotionally impacted that, "the pain of abandonment and the difficult consequences of growing up fatherless were the motivations that drove [his] passion for taking care of family throughout his life." (pg. 5) He would move past having to perform in beer halls and working in a coal mine to nurture and take care of one of the most famous circus families the world has ever know.

Tino Wallenda, one of Karl's many grandchildren was one of those who would learn about the wire under his careful tutelage. Training, or, "playing circus," began when he was seven years old. His sister Delilah, age four, and his two-year-old cousin, Rickey, played together. Tino would later claim that, "Karl was watching us, to see if any of us had that `spark.'" (pg. 20) All of them did, but perhaps because his mother, Jenny, who had married Alberto Zoppe, a man from an even more prestigious circus family, he had a genetic edge. Alberto's family, "had the first tented circus in Italy in 1842," and were very famous on the European continent. The marriage, which was destined to fail, left Tino insecure and burdened him with continual, "feelings of being torn and devastated." These feelings followed him throughout his lifetime, an experience eerily similar to his grandfather Karl's.

Tino would learn many lessons from his amazing family, a family who unfortunately had to deal with disaster more than once. Perhaps the most horrific one, the collapse of the Seven-Person Pyramid on January 21, 1962 had the most impact on the family. Karl, who was injured, was on the wire soon after, yet knew the "show must go on" and it did. Tino, who learned many of life's lessons from his grandfather, also remembered hearing him say, "Do what you think is right and trust in God." (pg. 22) In this book you will learn about Tino and how he defied his mother to perform on the Seven-Person Pyramid, about his family life, how he invited Christ into his life, you'll learn about the making of the film, The Great Wallendas, how he fell apart when one of his children was seriously ill, you'll travel with him on one of his most dangerous death defying wire walks, and you'll learn many other aspects of this truly amazing man's life, including how he walks for God.

This is an amazing biography of the Wallenda family and Tino's walk with God and the wire. One of the impressive aspects of this book is the extremely generous amount of photographs interspersed throughout this book. There is a full-color center section with glossies, but many more black and white photographs of the family that start with a very early Wallenda troupe. Included is the Wallenda family tree starting with Karl, who was married twice. The biographical information primarily is looked at from his first wife Martha's line as her daughter, Jenny, was Tino's mother. Although not excluded, it is understandable that Carla and her family receive little mention as her mother was Helen, Karl's second wife. The first part of the book is an historical overview of the family and autobiographical. The second half incorporates Tino's religious ministry and gives lessons on faith, how the read the Bible, and offers up many quotations or, "Words to Live By."

Quill says: Even if you don't care to read the Christian living section of the book, this is definitely an interesting biographical overview and photobiography of the Wallenda family that is well worth considering!