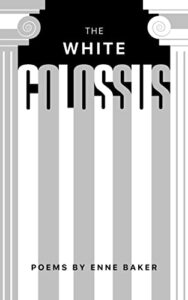 The White Colossus is a quietly powerful collection of poems by Enne Baker awash with a rousing imagination set to flicker purposeful reflection.

The poems are deftly themed, with entries covering diverse subjects such as life, loss, pain, love, and anguish among other things, and every layout is supplemented by dapper and unhampered words. There are 20 poems in all that vary in subject and composition with some spreading out as long entries such as "A Mad Boy's Love Song" and others as short as a few words like "The White Colossus."

Often, the entries circumnavigate around familiar allusions, situations, and thoughts, as they compassionately acknowledge human feelings. They are thematically titled as well with varying rhyme schemes. In "Homo Lazarus" for example, there are few-word rhymes in the beginning and another pattern arises towards its close. The poet's voice echoes in all his poems and holds attention to the end. Some, like "Stretch" and "I am Horizontal" appear to be pensive soliloquies as the narrator contemplates life being a journey. Elsewhere, the poet reflects on some of life's key experiences such as one in an emergency room. Words such as: "I’m only a mortal who only Wants to see. The nurses held me down, Soothing voices, In the emergency rooms, Among the screams Where I isolated myself From when biting down A rag, as I panicked, and My body was Water boarded with alcohol, And then Darkness wiped me out like Black marker on a Dry erase Board" describe a situation that prompts readers to think about their anecdotes as well.

Much of the book's nuances lie in the figurative language used throughout which is connected to nature and day-to-day activities making this an accessible tableau. Also, the narrator's undaunted grace as he shines a light on life's blue and black walls and difficult topics makes it easy for readers to sit through its reading. Some poems further demonstrate ardor for the craft through iambic lines that deliver keen observations and self-realization. They capture experiences with such finesse, lucidity, and rigor making them linger on long after the reading is done.

Others capture a wide range of emotions remarkably, even going ahead to capture feelings such as gloom and confronting this by finding a silver lining in the darkness. One such poem is "Wipe-Out." Baker possesses a unique ability to stir the soul and readers will inevitably find themselves reading the entries out loud for deeper understanding. The masterstroke of this anthology is the malevolent constructs that are voyeuristic in all the right ways. Taken together, the entries compound into a seemingly captivating catharsis. Overall, the diorama of Enne Baker is vast, his words evocative creating a wistful sense of belonging. His honest tone seeps through the stanzas making the poems feel personal and genuine.

Quill says: Enne Baker's thought-provoking anthology fascinates and provokes while also leading readers into the rabbit hole, and heading them out again, but this time, more aware, thoughtful, and wary.

To learn more about The White Colossus, please visit the author's Medium page.