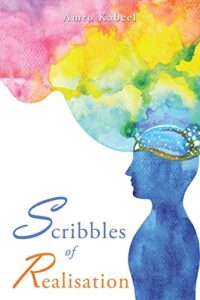 Scribbles of Realisation came as a surprise to me as a reader. The premise is simple: It is a compilation of short stories exploring the subject of faith. In fact, the title is absolutely perfect, considering that this author’s understanding, compassion and vision for everything from religion, to humanity, to the way we like or do not like ourselves, strikes the reader and makes us realize what life is all about. In some ways, it literally allows readers the chance to forgive ourselves, while going back to our spiritual roots.

I don’t want any reader to get me wrong. This is not the Bible. This is not the Qur’an. This is also not a preacher in your face, so to speak, bringing down the Hellfire on your head and “telling” you what to think, do, speak, etcetera. It is a collection of simplistic, special – and, at times, surreal – ‘scribbles’ that represent this one man’s adventure to find God and reach out to everyone from Muslims to Christians and beyond.

Amro Kabeel allows us to truly know him and his attempt to go on a journey, while not always knowing he was on one. It was more than a few years ago that the author describes himself as a lost soul, an emotion that many of us have felt during our lifetimes. Unhappy, obsessed with things that didn’t really matter, he was a “westernized Arab” who was, at the time he started his scribbling, someone who was only “chasing happiness” while trying to prove he could be happy. He wanted approval. He also wanted to be accepted if he kept hold of his Muslim identity. And, again, we all know there is still bigotry and unacceptance that thrives in the world, even though millions wish it would go away, making this man’s journey even more difficult.

When his own sibling told him that he was trying to be two “different people” and that he should choose one and stick to it in order to be happy, that is when he realized that to do this, to choose the soul he really was, he needed to go on a type of religious path in order to discover the truth about himself. In essence, he had to accept himself in order for others to do the same. Which is exactly the quandary I found myself in once upon a time.

Readers will love hearing about Amro Kabeel’s childhood; sleeping under the stars of Egypt’s North Coast with his paternal uncle; meeting up with his uncle from his mother’s side and receiving a prayer carpet that he still utilizes today; to his struggle with obesity when he was only thirteen and how he begged God to help him fit in and not be subject to bullying or disapproval. Everything he stated, from the banal and normal to the mosque he walked into one day that became his second home because he gained the friendship and support of the Iman giving the sermon – the one person who would help him find his way in life – will touch the hearts of all readers. Because of this, the book succeeds in helping everyone get through the tough times in order to feel the happiness that awaits us. Compiled perfectly, in easy to read and understand chapters, these “scribblings” are some of the most memorable this particular reviewer has had the benefit to read.

Quill says: Scribbles of Realisation is an outstanding work of faith and promise that is truly unforgettable.

For more information on Scribbles of Realisation, please visit the website: www.xlibris.com