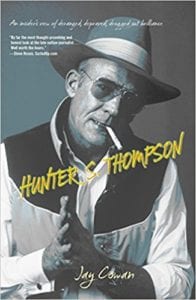 To sum up Hunter S. Thompson's character, career and lifestyle would be a daunting task, as he was one of our most eccentric well-loved literary figures of the twentieth century. Yet, Jay Cowan pulls it off, fully understanding the gravity of the undertaking in writing a biography for the author of numerous books and articles, including Fear and Loathing: on the Campaign Trail, Fear and Loathing in Las Vegas, The Rum Diary, and columns in the San Francisco Examiner and on ESPN.com.

Add to the undertaking the fact that Thompson is credited with creating a literary genre dubbed gonzo journalism, with Cowan succinctly assessing, only a few artists of any kind have ever developed their own genre so successfully with such a stranglehold of originality and talent that they were the only ones thought competent to pull it off and everyone else was just a pretender.

If that not intimidating, what is?

Ultimately, if anyone could write a credible biography for Hunter S. Thompson, Cowan is a first-class choice. As a friend of Thompson for over 40 years, a longtime resident of the Aspen area, and someone who even spent a stint living in a cabin on Thompson property (which Cowan describes as a psychotic sculpture garden), he most definitely has the intimate knowledge to reliably deliver a back story.

Cowan fluid writing style keeps the reader traveling at an energetic pace throughout the book, as he integrates excerpts from Thompson letters and published material, as well as perspectives from a wealth of Thompson friends. The author is skillful at creating vivid portraits of characters and moments, providing a holistic story of a life that hardly lacked inspirational material.

It seems like a major challenge faced by Cowan was that of creating a work that operates on a readable continuum. Telling Thompson colorful story in chronological order would perhaps be an impossible feat, and to tell his life story in any organized matter would perhaps be just as taxing. Cowan manages to weave an intricate and intriguing tale, attempting to provide a central focus for each chapter, including that of Thompson's writing process, his prolific letter writing, his friends and lovers and his extracurricular activities (including, but not limited to, extensive drug-use, gun-use and travel). One finds out that it is clearly not easy to untangle each topic from one another, but this book is a successful attempt to bring clarity and depth to such an interesting life. Cowan most definitely does justice to Thompson legacy, avoiding the simple reduction of his life to days-long, deadline-cheating frenzy of drugs and sleeplessness, yet he acknowledges where truth and myth collide.

Quill says: A must-read for any Hunter S. Thompson fan.