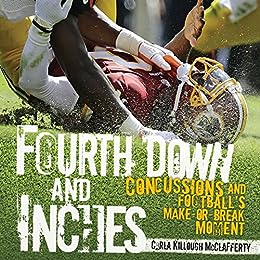 It was a rough-and-ready game for athletes who were willing and able to give it all, including their lives. Von Gammon “died as a result of playing the game he loved so much.” Football was slated to be outlawed, but Von’s mother, Rosalind, wanted it to continue. Fans and players alike clamored for the game’s continuation, a game that “was a perfect combination of brains, brawn, and brutality.” Feelings were mixed as some luminaries were against the game while others such as Teddy Roosevelt supported it. Von had died in 1897 and in spite of the continued deaths and injuries, the game went on.

The violence and deliberate brutality were alarming and finally it was agreed that an Intercollegiate Rules Committee would be set in place. Roosevelt was convinced, in 1905, that “the evils of the sport can be eliminated and the game saved.” Eventually, after a few name changes, the “main governing body” of the collegiate football arena was called the National Collegiate Athletic Association (NCAA). Illegal and potentially lethal moves were banned from the game and some sense of civility was brought to the field. In spite of these changes, the “football rules didn’t drastically reduce the number of football-related deaths.” What was going wrong?

If a player broke an arm or a leg, the result was visible, but what about those head injuries? Oftentimes the “result of a collision is often trauma--a term derived from the Greek work for wound.” Getting a “ding” or “bellringer” didn’t necessarily exclude a football player from continuing a game. A little headache, nausea, or blurry vision wasn’t going to keep a man down. Some players continued to die on the field, but many others would later lead sub-par lives as a result of these invisible injuries. In this book you’ll read about those players, the science behind those subtle traumatic brain injuries, repetitive brain trauma, CTE, what researchers are now learning, and hope to learn in the future.

This is a startling book about the result of concussions earned on the football field. The basic history of the game is outlined for young readers to examine. There is an immediate hook with the death of young Von Gammon, but we go on to see both sides of the football debate. A look back in time unearths the detractors and somewhat prophetic anti-football men such as Harvard president Charles William Eliot. The first part of the book pinpoints alarming incidents, including deaths. The latter part of the book goes more into the science of concussions and brain injury, closing with yet other examples of its devastating consequences. In the back of the book is an index, source notes, a selected bibliography, and additional book and website resources to explore. There are free complementary, downloadable educational resources on the publisher’s website.

Quill says: This is a powerful book that should be read and discussed among young and old alike in order to prevent sports brain injuries.